A Bi-Partisan Letter in Support of Peter Parente

This Tuesday could be the most important city council election in over ten years. For too long, tax give-a-ways, limited downtown retail, and ill-conceived development has plagued our city, stressed our schools and city services.

We believe it’s time for change. Peter Parente has the passion, commitment and vision that offer this opportunity. His election will bring a new majority to the City Council and a new direction for our city.

Please join with us and support Peter Parente for City Council on Election Day, this coming Tuesday, November 2nd. .

Candidate Parente Gains Support From Both Sides of the Aisle

“A leader who can bring people together” isn’t just a slogan for Peter Parente, it’s what he does every day. Whether it’s his community work at St. Josephs Church, the Memorial Day Parade, or the 9/11 Vigil, Peter’s proven track record shows his ability to join together people from all backgrounds and get winning results. On November 2nd, you can make the right choice for New Rochelle by voting for Peter Parente  to represent District 3.

On Friday, October 15, 2010, The New Rochelle Public Employees Voted to support Peter Parente in his effort to be elected as Councilman representing District 3 on the New Rochelle City Council.  Angelo Formisano, Secretary-Treasurer Local 663 made the following statement, “We find it conceivable that you truly are the candidate who will stand up for the average working class man and his family. Our Union President, Mr. Lamont Taylor, is pleased to tell you that Local 663, the New Rochelle Public Employee’s stand with you and supports your effort in this upcoming election to bring the people of New Rochelle back together again, as you have demonstrated in the past.”

This endorsement is the third endorsement received by Peter Parente in his effort to be elected to represent the good people of District 3 in this special election to fill a vacant seat on the city council. To date, Mr. Parente has been endorsed by Westchester VPAC, Local 273 International Association of Fire Fighters in New Rochelle and now The New Rochelle Public Employee’s Local 663.

Mr. Parente commented, “I am truly humbled by this third endorsement and by the fact that so many of our hard working men and women recognize my ability and effort to bring the people of our community together to address their many concerns and to develop viable solutions to the important issues our entire district and city face today in the future.”

Peter Parente, Candidate for New Rochelle City Council District 3 in the upcoming special election to be held on November 2nd has received the endorsement from Local 273 International Association of Fire Fighters.  President, Byron O. Gray stated, “I and many of my fellow members of Local 273 IAFF are aware of your proven commitment to the issues and quality of life in the City of New Rochelle. We feel with great confidence that you are the best candidate in these troubled times and look forward to working with you in the future.”

Mr. Parente commented, “I was humbled by the confidence these brave fire fighters have placed in me. As a nine-year homeowner, I have been a long-time proponent of public safety services in our community. I am very grateful for their endorsement and support and for their service to our community. If elected I intend to work very hard to live up to the trust they and so many others in the community have expressed towards my candidacy for city council. The trend in City Hall, put forth by those who steer the direction of the City Council, has been to reduce public safety through layoffs and attrition; a policy I strongly oppose. Nothing is more important for the residents of District 3 and the City of New Rochelle than public safety.” 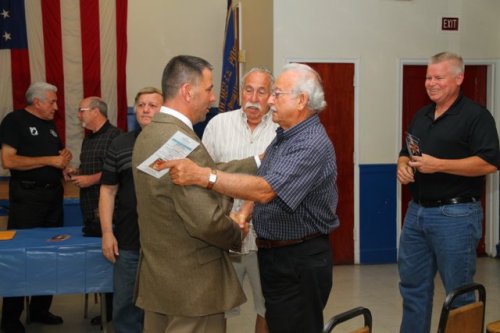 A Special Election is being held in the city on November 2nd 2010 to find a replacement for Councilman James Stowe who passed away unexpectedly on Aug 4th of this year. Parente, a successful business owner, United States Marine and veteran of Operation Desert Storm is known throughout the city for his active involvement in numerous community events.

Parente, a lifelong New Rochelle resident is probably best known for his leadership role in bringing about the return of the city’s Memorial Day Parade. A tribute to veterans, the parade attracts thousands of local people along with servicemen and women from all around the country each year, and is becoming the largest event held in the city. He has also taken the lead in the development and coordination of the 9/11 Memorial and Vigil in remembrance of the loss of life resulting from the September 11 attacks on our nation; all part of his long-standing commitment to community involvement.

Running on a platform that would, among other things, call for realignment of the city’s development policies that currently place tax burdens on residents as a result of tax abatements and PILOT programs issued to developers; a platform that encourages and supports neighborhood involvement in decisions most affecting their community, addresses the flooding issues in District 3, and supports expanded youth programs to deal with the many challenges faced by our youth. Parente has earned wide-spread community respect for his inherent leadership and ability to reach out and bring people to the table regardless of party affiliations or backgrounds.